The night cleaves, revealing
shape beyond the road’s
unboundaried form
While restless winds of craft
and lore coil in transient song
The korax dives the triple
seas and hunts the silence
of unbroken thought.
Inside the gyre time
waits with slow stone flame
Draw close to me

The night cleaves, revealing
shape beyond the road’s
unboundaried form
While restless winds of craft
and lore coil in transient song
The korax dives the triple
seas and hunts the silence
of unbroken thought.
Inside the gyre time
waits with slow stone flame
Draw close to me

With the sound of a loud gong, ‘The Cartographer’ is introduced: the new album by cellist Jo Quail (UK). The basis for the work, which will explore musical unknown terrain, is a self-written poem in five verses. Shortly after that intro, the poem is gently recited. These words will also characterize the musical beginning of this journey. By means of a custom made grid system, full of letters and prime numbers, these words get their own melody. The result is the first theme for the violin. What follows is an impressive contemporary dark symphony in five movements.

What preceded it? Jo Quail won the Commisioned Artist-award in 2019, published by Roadburn Festival (NL). One year later, ‘The Cartographer’ was finished and ready to perform. But due to the covid-pandemic the project was postponed. Unfortunately, in 2021 this scenario repeated itself. The long-awaited premiere of ‘The Cartographer’ took place on April 23rd 2022. In the meantime, Jo forced herself not to make any revisions. It was a snapshot and had to stay that way. It gave her the opportunity to record the work in a studio.

The main theme of the Roadburn Festival 2022 was ‘Heaviness Redefined’ and the commission for Jo was to examine how a classical set of instruments can be used in so-called ‘heavy music’. Classical music in itself can also sound heavy, but the Roadburn Festival was especially interested in the result as a mix with contemporary heavy genres.

Jo Quail has years of experience with the electronic cello and a looping station. With it, she creates a rich universe by laying various musical ideas ‘on top of each other’ – simply put. The heavy metal scene is not unknown to her, as she has been touring with bands such as MONO and Myrkur. Roadburn Festival had done its research well to entrust this commision specifically to her. In the album’s liner notes, Jo explains how she sees heaviness in music: “It’s an emotional concept, reaching far beyond the confines of volume, speed and instrumentation. She is experienced via the intention of the composer, and then the delivery of the performance.” In addition, she asks herself the interesting question – in one of the four short intro videos (YouTube) – how silence can be experienced as loud with 15 musicians on stage? This is a project not without ambition.

From a personal view I do not think it’s obvious to easily appreciate or connect with contemporary classical music. With compositions written by Ligeti, Kurtag or Xenakis I feel little connection, unlike with the work of Glass or Pärt. It’s the same for me with the heavy metal scene: not much connection there, unless there’s a mix with symphonic bombast as heard in the music from Epica or Nightwish. Thankfully, there are exceptions and the musical result of ‘The Cartographer’ is certainly one of them.

‘Movement 1’ is the part in which the cello has the main voice. She explores the landscape. It is a dark and mysterious place. Under the ground things are unstable: there is a threat to be observed. The soundscape gets gradually richer. The contours of a gloomy world become clearer and clearer. The brass players enter subtle, as the timpani does too, and by doing so making the feeling of threat more concrete. Undoubtedly something is about to happen. Quite a build up.

For this ambitious project, Jo Quail is assisted by the New Trombone Collective: an 8-headed ensemble. Additional instruments are: electric violin, piano, percussion and 2 voices. A large ensemble has its own specific challenges, as the story of the timpani proves. When the largest one got to the recording studio, it couldn’t get through the door…

In ‘Movement 2’ a few demons are being released. They fly around our ears and are created by the trombones with their long-held notes. In combination with the percussion, the air is tense and heavy. I feel embedded in a Gustave Doré-like landscape, as in one of his illustrations at Dante’s Inferno. The short motif on piano, together with all kinds of hard-to-define sounds halfway the song, create a feeling of unease. Multiple listening sessions are required to appreciate the richness of this music. There’s so much to discover and every time new things get noticed. The narrative and cinematic character of the music helps the listener to stay on track. The end of this second part is a first climax and leads us straight to another highlight of ‘The Cartographer’: the third movement.

With ‘Movement 3’ we enter the core of the story. This longest track of the album is, with its 15 minutes, a mini symphony in itself. All registers are being played, but first there is an intro. The piece gets introduced with mysterious voices sounding like a Greek siren. That such creatures are untrustworthy can be heard in the percussion, which sounds like an alarm. With some solid blows on the timpani things get serious. The silence between the strokes sounds heavy and loaded. The piano echoes the blasts made by the timpani, a clever and powerful effect. Enter a whispering male voice who recites the third verse of the poem: “The korax dives the triple seas and hunts the silence of unbroken thought.” Meanwhile the timpani continue to beat and we can clearly hear why the piano is a percussion instrument too. The central theme of ‘The Cartographer’ is introduced with the brass and it will continue to sound throughout the song: threatening but also moving. The volume can be put at maximum level halfway the movement for what is the ultimate mix between contemporary classical and heavy metal music. This is unmistakably the highlight of the album. These are intense minutes filled with strong percussion, extreme use of vocals, trombones that keep the Leitmotiv going.. the violin and cello support subtly. Toward the end the heaviness gets lighter. Only a short motif remains, played repetitively by the brass. It’s one of many musical details that gives this piece its ‘fullness’.

A solid and tight rhythm features ‘Movement 4’. With its pulsating character this part gives a certain nervousness and heaviness too. There’s hardly any room to breathe. It is a long and firm march to the exit: the last and fifth movement.

‘Movement 5’ is the shortest track of ‘The Cartographer’, but it is a very strong end. It’s like a an echo of what we heard earlier: a radio-edit of an ambitious and successful project. After a whispering recitation of the final verse the music goes straight to a ‘grand final’ where the musicians go all the way on their instruments and the volume. As a listener, you can only let go and let yourself be carried away in the vortex of bombastic sounds. And before you even realize it, there is the unavoidable silence of the end. A surreal feeling. What a ride!

‘The Cartographer’ is an epic masterpiece in which Jo Quail’s musical capabilities as a composer are fully exposed. With the e-cello alone, she has already been able to offer the public a fascinating and innovative soundscape. But with the support of other musicians and a richer group of instruments, she made a great step forward in the creation of a true symphonic work. The visual artwork fits in very well with the mood of the album and makes this project simply ‘complete’ 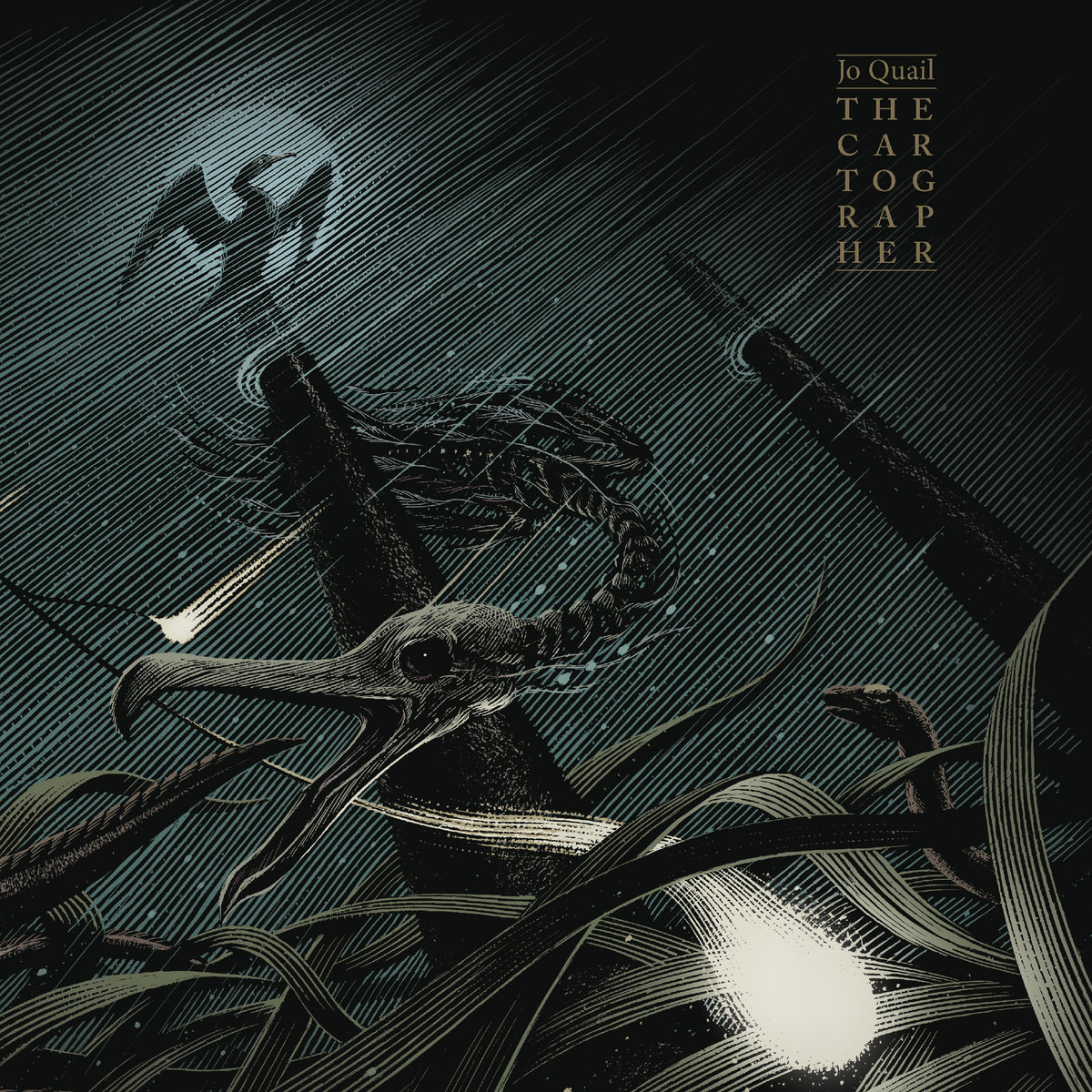